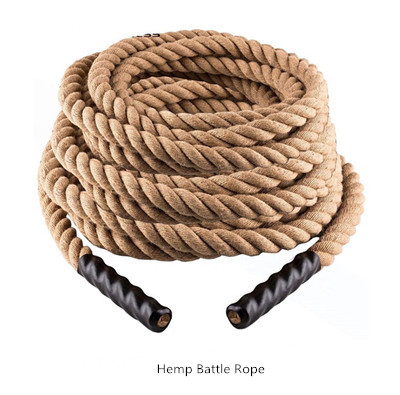 When you see battle ropes at first sight, you must be intimidated by such giant ropes. Actually, battle ropes are not an ultra weight training tool that requires to push your limits and challenge yourself all the time. On the contrary, it is an interval exercise that requires each workout period followed by a longer break. Finally, you would be surprised to find out that you have only worked out for 2 minutes in a 10-minute battle rope workout routine.

If you are new to battle ropes workouts, you might think it is an exercise that primarily targets the arms. However, it is found that battle rope workouts engage just about all the major muscles of the body including your entire core and they offer great cardio training, which makes the rope a must-have tool for either burning calories or building up muscles. In fact, it only takes a few minutes out of your fitness routines to get a full-body muscle building along with fat burned. Try to incorporate the battle rope exercise below into your workout routines to get started.

Power slam is one of my favorite battle rope movements. It requires a certain degree of explosive power of your muscles in the core and arms. With time, you will be surprised to find out how strong your core has become. More than that, it also serves the purpose of alleviating mental stress and unleashing yourself through every slam.

To perform battle rope slam, stand tall with tour feet shoulder-width apart. lower your hips and stop before your hips reach the height of your knees while keeping your back and caves straight and stationary throughout. Hold the ends of the rope and then draw the ropes to your sides until fully extended arms. Continue to squat, squeeze your glutes and core, and then explode and jump into the air while lifting the ropes overhead. And then forcefully slam the rope on the floor while landing back to the ground and forming into a half squat. Repeat for 10 seconds and then take a break for 20 seconds.

Another classic battle rope movement is the alternating waves, a full-body move that primarily focuses on your back, core and forearm strength. The key to this movement is doing a quarter squat lie you are sitting in a chair and swing the circles as slow and big as possible. That way, you will feel the whole weight of the rope and learn how to control the weight during the motion.

To perform alternating waves, stand with feet shoulder-width apart in a quarter squat. Hold the ends of the rope and then draw the ropes to your sides until your arms are fully extended. Start to make circles by raising your arms and swinging the ropes up and down in front of your chest. Keep the circle going for 20 seconds or more and then take a rest for 30 seconds or more.

Next: How to Work out with Barbell: Benefits, Techniques and Variations